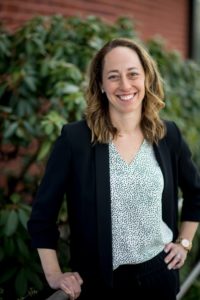 Dr. Burghardt is a native of Philadelphia. She completed her undergraduate degree at The College of William & Mary, where she majored in Biology and English and was also co-captain of the women’s lacrosse team. She received her medical degree at Yale University and while there was elected to the medical honor society Alpha Omega Alpha. She completed her pediatric residency in Denver, where she was proud to receive the Neonatal ICU Nurses’ award for excellence by a pediatric resident. Despite three years of her best efforts in Denver, she remains to this day a mediocre skier.

Prior to joining Milton Pediatrics, Dr. Burghardt worked at Boston Children’s Hospital and South Shore Hospital in the pediatric emergency department. Her previous research was in the area of injury prevention and pediatric medication safety. She completed a Masters of Public Health in Health Policy and Management at the Harvard T.H. Chan School of Public Health and has ongoing interest and involvement in health policy and literacy promotion. Dr. Burghardt is the medical director of Milton Pediatrics’ Reach out and Read program, which provides a new book to each child at well visits between 6 months and 5 years of age.

Dr. Burghardt lives in Duxbury with her husband Will, their three children, Emmett, Tess, and Harris, and their Greater Swiss Mountain dog, Winnie.  She is a dedicated runner and loves the outdoors.